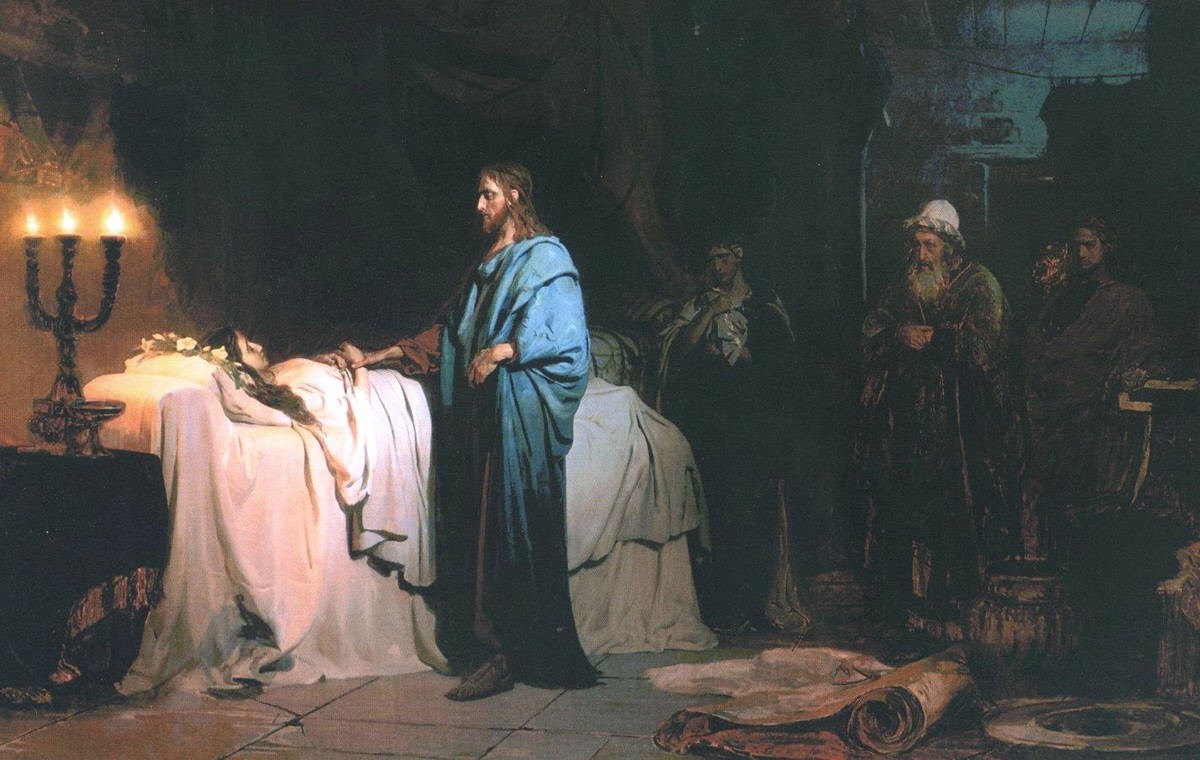 The daily Gospel reading from the Mass for Sunday Cycle B of the 13th Week of Ordinary Time is Mark 5:21-43.

Landing near Capernaum after the mission to the Gentile lands on the east side of the Sea of Galilee, Christ is met by a great crowd. Jairus, a respected and powerful Jewish leader, risks his social and religious standing by publicly humbling himself by kneeling before Christ; he begs Christ to miraculously heal his daughter who is near death. Jairus, perhaps desperate, has come to believe that Christ can miraculously heal his daughter; seeing Jairus’ faith, Christ goes with him.

On the way to the dead girl, a woman affected by the slow death of bleeding for 12 years, pushes through the crowd to approach Christ from behind.  Ritually impure due to her hemorrhage and an outcast from society and Temple worship, she humbly seeks only to touch Christ’s garment, faithfully seeking a miracle.  Immediately, Christ mysteriously knows she had touched His cloak and, falling down at His feet in fear and awe, she confesses. Because of her faith, Christ grants her a miraculous healing and returns her to life; no longer unclean, the women is also restored to Jewish sacramental life.

Word comes that Jairus’ daughter has died, but Christ tells him not to fear and to believe.  Entering Jairus’ house, Christ dismisses those wailing over the girls’ death, saying “the girl is not dead but sleeping”; the crowd laughs at Christ. After putting them out, Christ takes the dead girl’s hand and raises her to life. Returning to life, the first thing the little girl sees is the face of God. News of the miracle spreads like wildfire.

Awed by Jesus Christ – Son of God, Jesus Christ exudes charisma and power, causing even powerful rulers to kneel before Him. Divine Mercy, Jesus responds with compassion to the desperate and with patience to those who mock Him. Divine Physician, Christ has a supernatural awareness of illness and even the state of a departed soul; He has the knowledge and power to heal and raise the dead with a word.

1) Christ is the Perfect Man and the perfect model for Catholic manhood. Reflect on Christ’s love and care for vulnerable women despite the religious stigmas of the time (laws against coming in contact with blood or the dead).

2) Contrast the doubts of Christ’s disciples and the mourners and the faith of Jairus and the woman with a hemorrhage. Reflect on Doubt (CCC 2088-2089) and Faith (CCC 153-165) and pray for Christ to give you an abiding faith that overcomes all doubts.

3) Both Jairus and the woman with a hemorhage have deep humility (willing to bow and beg) because of their faith and are obedient to Christ; this results in Christ’s outpouring of grace upon them. Reflect on the I (CCC 144-149) and pray for Christ to grant you a complete obedience of faith.