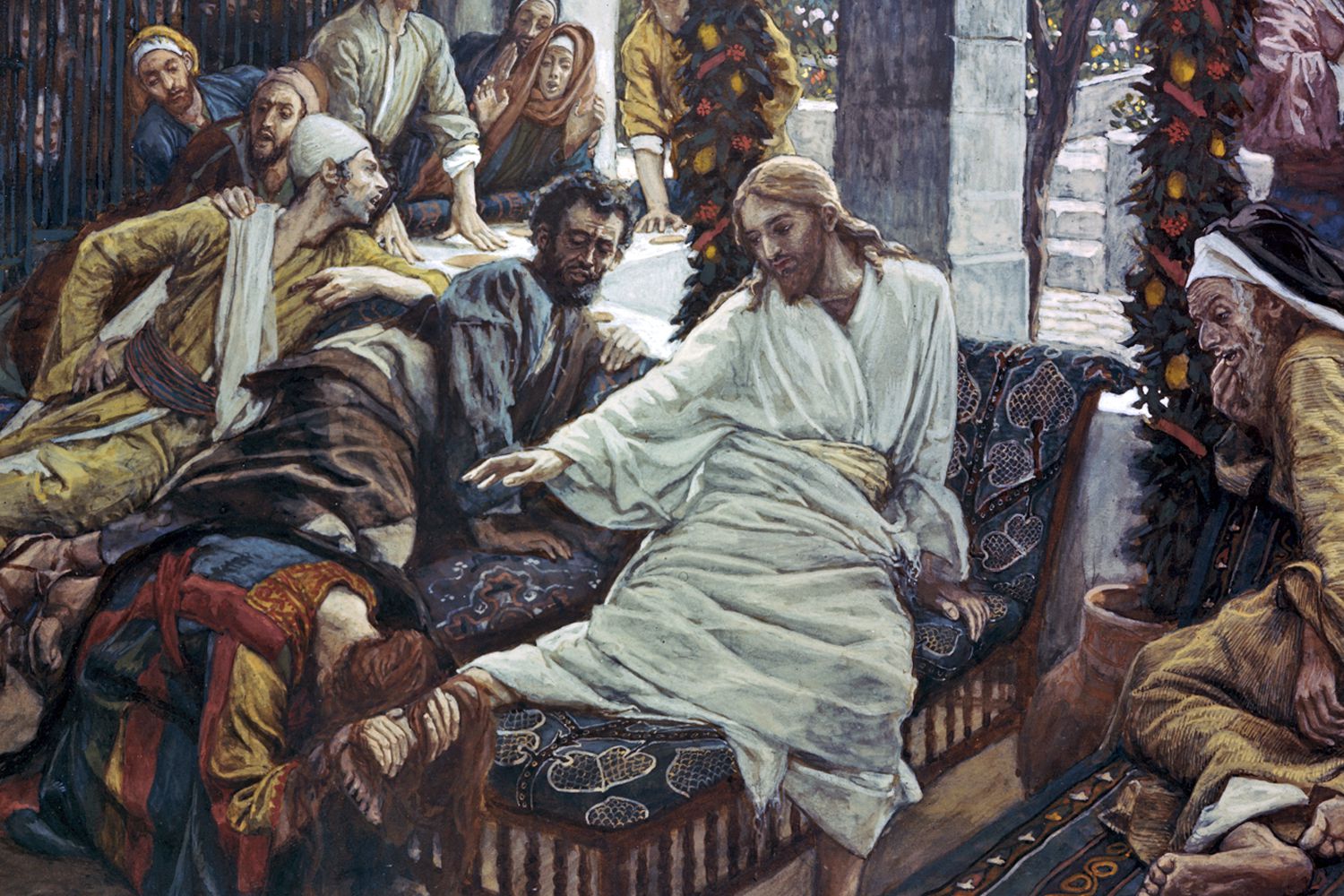 The Gospel reading from the Mass for Thursday of the 24th Week of Ordinary Time is Luke 7:36-50.

Christ is invited by a wealthy Pharisee named Simon to his house for a meal. Despite Jesus’ growing reputation as a great prophet (He has recently raised the widow’s son from the dead in Nain – Luke 7:11-17), Simon is skeptical of Christ; he refuses the most common courtesies (i.e. water for washing feet, a kiss of brotherhood), especially insulting given Christ’s reputation and stature as a rabbi.  Simon, foolishly, has invited Jesus into his home to test Him.

Christ sits reclined at table, His feet behind Him.  A woman, recognized by her reputation in the town as a sinner (likely a prostitute and/or promiscuous), subtlety crawls up behind Christ, washes His feet with her tears, dries His feet with her hair and applies expensive ointment.  Christ correctly assesses both the state of the women’s soul and Simon’s soul.  The sinful woman has fully repented, put her faith in Christ and demonstrated profound humility and reverence for the Lord.

In contrast, Simon is deceitful in his praise (i.e. calling Jesus “Teacher” while lacking respect), mistakenly confident in his own piety and judgmental of the sinful woman. Using a parable and asserting His authority over Simon, Jesus engages Simon to expose his own sinfulness and that he lacks charity; ominously, Christ implies that Simon’s lack of repentance, love for the woman and respect for Him will effect Christ’s forgiveness of Simon’s sins.  In contrast, Jesus startles those in attendance by forgiving the woman’s sins, crediting her faith (and repentance) and telling her to “go in peace.”

Awed by Jesus Christ – Divine Prophet is omniscient, Christ mysteriously knowing both the inner thoughts of the Pharisee and the sinful woman.  Divine King and Judge, Christ bluntly exposes Simon’s sinfulness in public and subtlety warns him that, without love, his sins won’t be forgiven.  Son of God, Christ has the authority and power to forgive the repentant woman’s many sins.

2)  The woman, assumed by most to be a harlot (“of the city”, hair uncovered, sinful reputation is known), approaches Christ in faith and repentance from her life of sexual sin. Many Catholic men regularly view pornography; Christ condemns looking at women with lust as the mortal sin of adultery (Matt 5:28). Like the addiction of alcoholism, pornography can’t be “managed”; absolute abstinence is the only way to purity and salvation.  Reconfirm your understanding about the sin of viewing Pornography (CCC 2354) and pray for Christ to help you give up pornography for the rest of your life.

3) After placing faith in Christ, repenting and being forgiven (today, in the Sacrament of Confession), Christ pours out grace through the Holy Spirit into the soul of the saved; the grateful soul, in turn, becomes a fountain of love (CCC 2712).  Reflect upon the Gifts and Fruits of the Holy Spirit (CCC 1830-1832) ) and pray for Christ to help you accept the Holy Spirit more fully in your life.