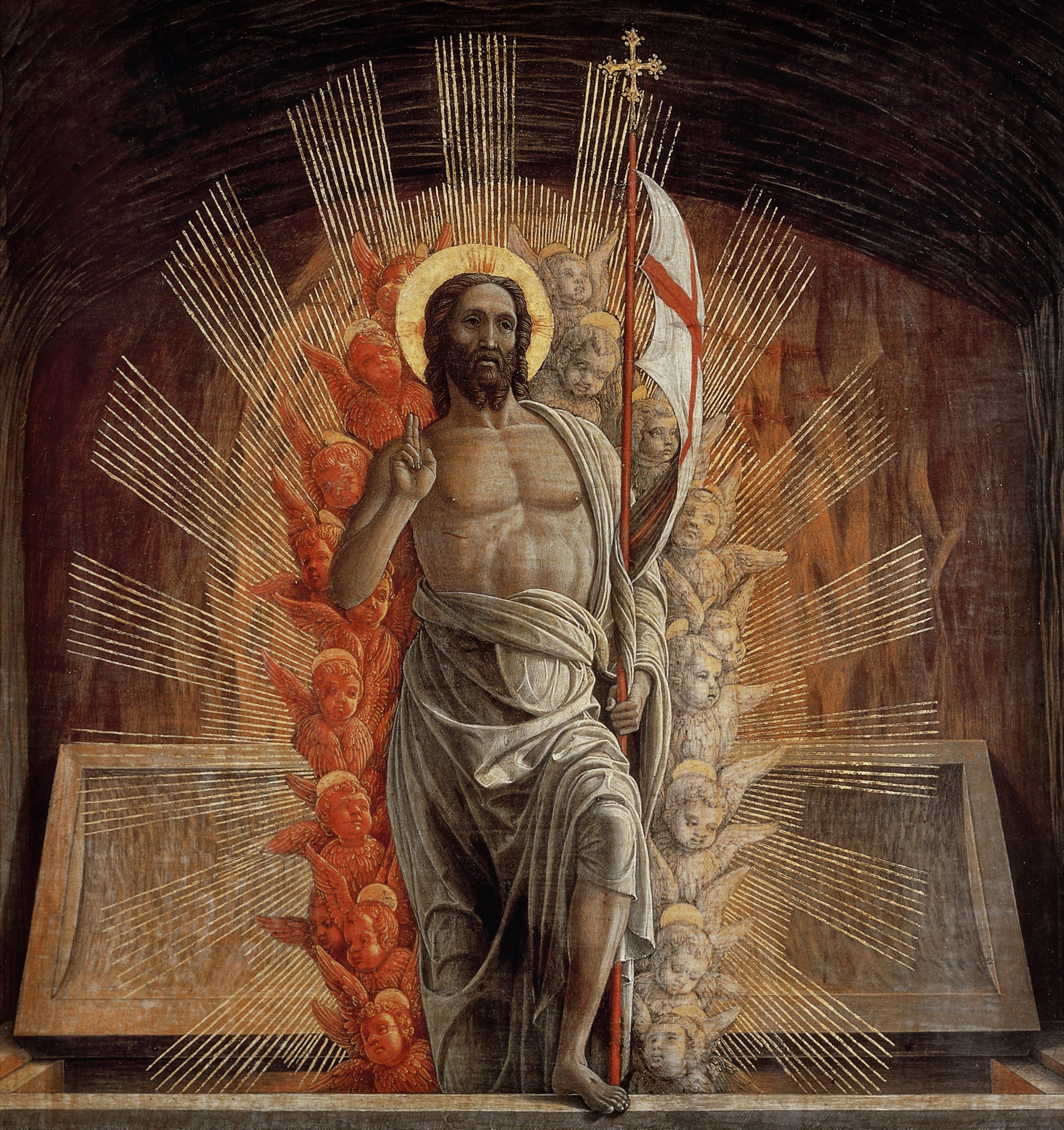 Christ’s Incarnation as the Son of God, a deliberate pilgrimage to the Cross for the salvation of all men, culminated in the brutal Passion  (Latin, passionem,  meaning, “suffering”, “enduring”) on Good Friday.  After the Blessed Virgin, Mary of Magdala and others hastily wrapped Christ’s dead body in burial cloths and placed it in the Tomb (the Holy Sepulcher) before the start of the Sabbath at sundown of Good Friday, the Apostles and disciples wait in fear and discouragement in the Upper Room. After the Jewish Sabbath (Saturday), Mary of Magdala goes to the tomb (with other women; Matt 28:1) on Sunday morning while it is still dark to complete the anointing of Christ’s dead body. Finding the massive stone rolled away, Mary of Magdala assumes Christ’s body has been stolen and rushes back to the Upper Room to tell Peter and John.

John outpaces the older Peter to the tomb but honors Peter’s authority by not entering Christ’s tomb. Seeing the burial cloths, John realizes that Jesus’ body has not been stolen, for grave robbers would not unwrap the body until they had carried it away where they could unwrap the body undetected and steal the expensive burial cloths. John also realizes that unlike Lazarus, who staggered out of the tomb when Jesus raised him from the dead and had to be unbound by others, Christ has somehow miraculously unwrapped Himself.

Peter arrives and leads John into the tomb. Christ’s body is gone but the head cloth/napkin (a small cloth placed over the face of the dead) and the linens that wrapped the body remain. Peter realizes that Christ has deliberately left a sign of His Resurrection by carefully rolling up the head cloth and leaving it to be discovered. Peter and John both begin to believe, for John reveals in the Gospel that they don’t fully understand Scripture which insists on His Resurrection; they will come to full belief when Christ comes to the Upper Room later Easter Sunday evening.

1)  The Sudarium of Oviedo (the napkin) and the Shroud of Turin (the linens) are ancient relics which may be the burial cloths found by Peter and John. The relics are mysteriously imprinted with the image of a man who bears wounds described in Christ’s Passion. The Church considers the objects worthy of veneration because they represent Christ’s Passion but stops short of declaring that they are the actual burial cloths of Christ. Read about mysterious nature of the Sudarium and Shroud and be awed.