Do you want this guy to teach your kids theology? 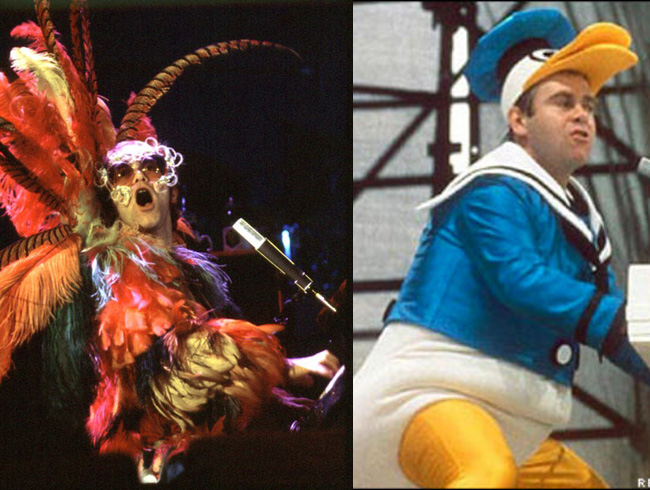 If you didn’t know, this is Sir Elton Hercules John (formerly, Reginald Kenneth Dwight) a “rock star” and committed homosexual who recently ventured into speculative theology (read that, “totally made up and false”)  in an interview with Sky News:

John said that gay members of the clergy should be able to wed and that he believed Jesus Christ would be in favour of gay marriage, which became legal in Britain in March.

“If Jesus Christ was alive today, I cannot see him… saying this could not happen,” the pop star said.

“He was all about love and compassion and forgiveness and trying to bring people together and that is what the Church should be about.”

Of course, Jesus was not a homosexual nor would not be in favor of homosexual  “marriage”.   Jesus also wouldn’t tolerate homosexual sexual acts, or any acts of sexual sin.  Jesus hates sin.

How do we know?  The Catholic Church, which in the Church that Jesus founded, and has preserved Christ’s teaching for 2000 years through the Grace of the Holy Spirit and the blood of the martyrs, says so.  See for example, from the Catechism of the Catholic Church:

2357 Homosexuality refers to relations between men or between women who experience an exclusive or predominant sexual attraction toward persons of the same sex. It has taken a great variety of forms through the centuries and in different cultures. Its psychological genesis remains largely unexplained. Basing itself on Sacred Scripture, which presents homosexual acts as acts of grave depravity,141 tradition has always declared that “homosexual acts are intrinsically disordered.”142 They are contrary to the natural law. They close the sexual act to the gift of life. They do not proceed from a genuine affective and sexual complementarity. Under no circumstances can they be approved.

2358 The number of men and women who have deep-seated homosexual tendencies is not negligible. This inclination, which is objectively disordered, constitutes for most of them a trial. They must be accepted with respect, compassion, and sensitivity. Every sign of unjust discrimination in their regard should be avoided. These persons are called to fulfill God’s will in their lives and, if they are Christians, to unite to the sacrifice of the Lord’s Cross the difficulties they may encounter from their condition.

2359 Homosexual persons are called to chastity. By the virtues of self-mastery that teach them inner freedom, at times by the support of disinterested friendship, by prayer and sacramental grace, they can and should gradually and resolutely approach Christian perfection.

Certainly, while Elton John is a gifted musician and entertainer, one wouldn’t rely on him for medical advice, financial advice, plumbing advice or anything outside his core competencies.  Certainly not for theological advice.

If you want the truth about Christ, turn to the Catholic Church.

Sadly, the culture is influenced about faith and morals by people like Elton John, who are far outside their competency when they attempt to offer theological speculations.

Catholic men:  You need to take responsibility for teaching your kids the Catholic faith.

Otherwise, Elton John is perfectly willing to teach your kids his version of Jesus.