The Sad Case of a “Feminist Father” 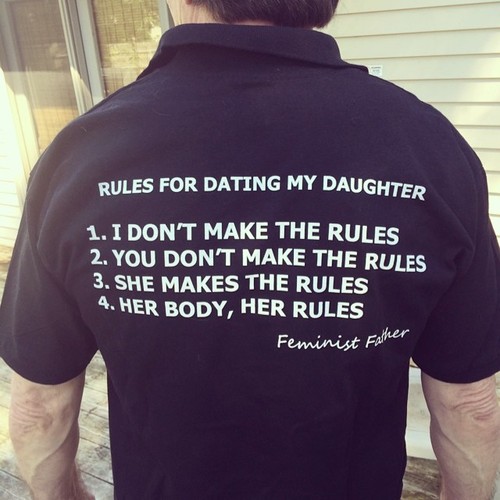 With a nod to we have a shirt worn by a father who has been neutered by postmodernism and feminism.

At the core of the New Emangelization, is importance of returning men to their roles as sacrificial protectors and defenders of the family and to pass on the Truth of Jesus Christ and His Catholic Church to the next generation.

Dad’s are supposed to protect their daughters; this is what dads have always done.  Until now.

This poor soul has given up his manhood by bowing to the feminist agenda, to the point of a clown-like shaming of wearing a shirt that is as humiliating as it is cowardly. And he is so brainwashed, he is proud of it!

The point here is not to be critical of this misguided anonymous “father”, but to realize the challenges to be faced with the abdication of manhood, the voluntary movement to sterility in men, both in terms of rejecting having children through contraception and abortion and the spiritual abandonment of children that they might sire.

Pray for all these poor souls, that they might come to know the Truth and to be willing to love to the point of being ridiculed for being manly buying Propecia.